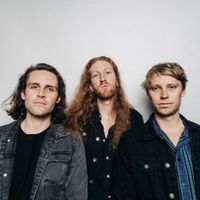 Hot off the back of their debut EP This Dying Light, Sydney locals Diver are bringing their explosive live show to the Lansdowne Hotel. In what will be their biggest show yet, Diver will be cranking it up and blowing the roof off. Having already sold out venues up and down Australia's East Coast, Diver are quickly gaining a reputation as one of Sydney's finest live acts. This Dying Light provides a taste of what people can expect from Diver's live show. Anthemic synths, shimmering guitars and stomping rhythms are the driving force behind the band's sound, which is tied together by singer Ruston Taylors soaring vocals and melodic progressions. From indie anthems to rock 'n' roll belters, This Dying Light is a culmination of flavours, influenced by both the band's lived experiences and surroundings. It is fitting that Diver will play The Lansdowne in support of This Dying Light, as the record is in itself a tribute to the band’s unabashed devotion to their glistening and gritty inner-west heartland. Joining Diver for the evening are fellow Sydney siders Polar Eyes and Lariska. Be sure to get in early to catch both these acts. Tickets: $20 Online $30 Door